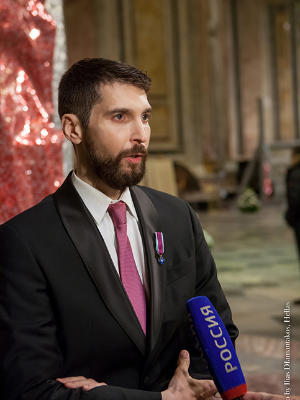 The renowned Artist/Sculptor Nikos Floros will exhibit another display of classic elegance in his unique “Sculptured Costumes: Maria Callas". His works will be displayed at the City Hall of Düsseldorf, under the auspices of the Consulate General of Greece in Düsseldorf, from November 25 to December 16, 2019

Mr. Floros believes that “Art is one of the strongest bridges between peoples around the world, bringing together nations with the goal of uniting cultures and promoting understanding and cooperation”. The Royal Institute Mohamed Ali fosters such noble vision.

Born in Arcadia, Greece, Nikos Floros grew up in Athens and has lived and worked in several major cities around the world. He studied at Columbia University & the Ecole des Beaux Arts in Paris as well as Classical piano and Classical theater in Greece.