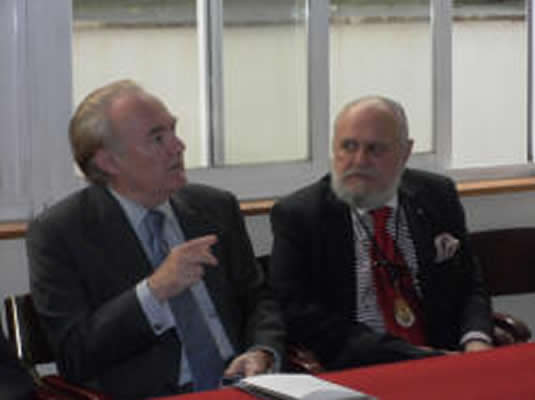 On May 25th 2011, a lecture was delivered by Prince Osman Rifat Ibrahim on the Egyptian Royal House, which took place at the Aula Marqués de Ciadoncha of the Heraldic College and organized by the Spanish Heraldic Society. The lecture, which was attended, among other significant personalities, by the Count of Cabra, the scholar Mr. José Antonio Dávila, was initiated by Mr. José María de Montells on behalf of the organizing entity, who in a brief exhibition, commented on the lack of knowledge that we have in our country (Spain) regarding modern Egypt and the importance of that data for a correct interpretation of the events that are developing in that country, giving way then to the presentation of the Marquis of Casa Real, as always, very bright and well documented.
The Prince spoke for an hour about the vicissitudes and circumstances of the Egyptian National Dynasty founded by Mohammed Ali, up to the present day, highlighting the Spanish participation in the creation of a modern army, especially the Cairo Artillery Academy, founded by General Sequera Carvajal, descendant of Cristóbal Columbus. He also unveiled the British enmity for King Farouk and the propaganda against him that was, in the end, what determined the coup of the colonels that precipitated the fall of the Monarchy, a regime that had fostered the coexistence between Muslims and Copts and the development and modernization of that African nation.

The speaker was widely applauded by an audience that filled the room, attentive and interested.
From (the Blog) “Salón del Trono" we convey our sincere congratulations to the Heraldic College of Spain and the Indies and the Spanish Heraldic Society, for having promoted a conference of such high level and continue strengthening the knowledge of the Royal House of Egypt in our Homeland (of Spain).

May the One and true God bring together Muslims and Copts under the wise rule of the legitimate King of Egypt and may the glorious Nile Nation regain peace, freedom and development for the good of its people.

(This text was taken from the Blog “Salón del Trono")